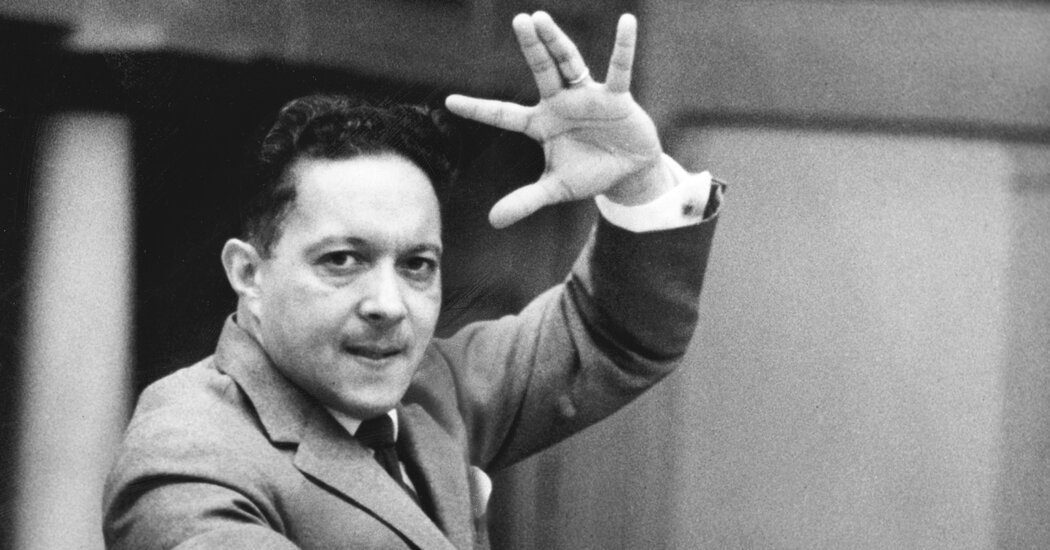 Everett Lee, a bandleader who broke racial barriers but then fled the prejudice black classical musicians faced in the United States to make a meaningful career in Europe, died on January 12 in a hospital near his home. him in Malmö, Sweden. He was 105 years old.

His daughter, Eve, confirmed the death.

Already concertmaster leading white theater orchestras in 1943, Mr. Lee made a significant breakthrough on Broadway when he was appointed musical director of Leonard Bernstein’s “On the Town” in September 1945. The Chicago Defender l called the first black conductor “to wave the baton over a white orchestra in a Broadway production.

In 1953, Mr. Lee conducted the Louisville Orchestra in Kentucky, a trying afternoon for him due to lack of sufficient rehearsal time and the pressure of history. United Press reported that Mr. Lee’s concert was “one of the first” in which a black man conducted a white orchestra in the South; other outlets went further, claiming it was the very first. The Courier-Journal spokesman said Mr Lee “made a most favorable first impression”.

Then, in 1955, shortly after Marian Anderson made her Metropolitan Opera debut, Mr. Lee conducted the New York City Opera, another first. (His wife, Sylvia Olden Lee, a vocal coach, had been named the first black musician on the Met staff at that time.)

“Not only was its direction expert in all its technical aspects,” wrote a New York Times reviewer of his “La Traviata,” “but it was informed by musicality and an unusually acute understanding of the character of the opera. “.

Despite these breakthroughs, racism limited Mr. Lee’s American career, but he refused to let it define his work. “A negro, standing in front of a white symphonic group?” artist manager Arthur Judson asked him in the late 1940s, refusing to enroll him, according to Mr Lee’s daughter. “No I am sorry.”

Mr. Judson suggested that Mr. Lee follow other exiled black musicians abroad. Mr. Lee did not leave initially, but he eventually did in 1957 and flourished in Germany, Colombia and especially Sweden, where he succeeded Herbert Blomstedt as musical director of the Norrkoping Symphony Orchestra from 1962 to 1972.

Mr. Lee often said that he wanted to return to the United States but that he would only do so to become musical director of a major orchestra.

“I didn’t have much hope at home, despite some successes,” he told The Atlanta Constitution in 1970, explaining that racism was less of a factor in his life and work in Europe. “It would be nice to work from home. I’m American, why not? If he could succeed in Europe, he concluded, “I should be able to succeed here”.

Only one major ensemble, the Oregon Symphony, has ever given such a position to a black conductor: James DePreist.

Everett Astor Lee was born August 31, 1916, in Wheeling, W.Va., the first son of Everett Denver Lee, a barber, and Grandma Amanda (Blue) Lee, a housewife. He began playing the violin at age 8, and his talent prompted the family to move to Cleveland in 1927.

Mr. Lee led college athletics, a few years behind Olympic gold medalist Jesse Owens, and led the Glenville High School orchestra as a concertmaster. He came under the mentorship of Cleveland Orchestra conductor Artur Rodzinski after a chance encounter at the hotel where Mr. Lee worked as an elevator operator. He studied at the Cleveland Institute of Music with the Cleveland Orchestra’s concertmaster, Joseph Fuchs.

After graduating in 1941, Mr. Lee enlisted in the military and trained to become an airman from Tuskegee, Alabama, but was injured and discharged.

Mr. Lee moved to New York in 1943 to play in the orchestra of “Carmen Jones,” an Oscar Hammerstein II rewrite of Georges Bizet’s “Carmen” that had an all-black cast but a predominantly white orchestra. When the conductor fell under the snow, at the beginning of 1944, Mr. Lee left the chair of the first violin to conduct the music of Bizet. Spells conducting the Gershwins’ ‘Porgy and Bess’ followed, before Bernstein hired him as concertmaster and later musical director of ‘On the Town’.

Mr. Lee then played in the violin section of the New York Symphony Orchestra for Bernstein, who won a scholarship to Tanglewood in 1946. Mr. Lee studied conducting there with Serge Koussevitzky of the Symphony Orchestra of Boston and led the Boston Pops in 1949.

“Like most young people,” Mr. Lee told the New York Amsterdam News in 1977, “I thought I could go out and conquer the world.”

But there was a color line that Mr. Lee could not cross. Rodzinski, now conductor of the New York Philharmonic, refused to let him audition for the orchestra’s violin section, knowing the inevitable outcome. Hammerstein considered him for a touring production but told him that “if a colored boy is the bandleader and we go South” it would cause an uproar and the bookings would be cancelled.

Mr. Lee responded by creating the Cosmopolitan Little Symphony, an integrated ensemble that rehearsed at Harlem’s Grace Congregational Church, in 1947. It made its downtown debut with him on the podium at City Hall in May 1948, with a bill that included the premiere of “Brief Elegy” by Ulysses Kay, one of the many black composers Mr. Lee programmed during his career.

In 1952, the Cosmopolitan gave a concert of Giuseppe Verdi’s “La Forza del Destino” to 2,100 people at City College, with Regina Resnik of the Met as Leonora.

“My own group is moving forward quite well,” Mr. Lee Bernstein wrote, suggesting that “this could be the start of breaking down many insane barriers.” But starting any set was difficult then, let alone an integrated set. Recruitment had been difficult because trained black musicians now believed “there was ‘no future’ in achieving high standards of skill”, Mr Lee wrote in The Times in December 1948.

Despite signing with the staff of the New York City Opera in 1955, Mr. Lee left for Europe. In 1957 he moved to Munich, where he founded an orchestra at the Amerika Haus and led a traveling opera company. The guest spots came quickly; he conducted the Berlin Philharmonic Orchestra in June 1960, one of several European dates.

Like Dean Dixon, a black conductor who conducted the Gothenburg Symphony Orchestra from 1953 to 1960, Mr. Lee found refuge in Sweden. He maintained an ambitious repertoire in Norrkoping – performing operas from “Aida” to “Porgy”, conducting large amounts of Swedish music, with Hans Eklund’s “Music for Orchestra” a favorite, and often collaborating with jazz musicians conducted by saxophonist Arne Domnerus. It was a balance between the new and the old, the local and the other, which Mr. Lee repeated as conductor of the Bogotá Philharmonic Orchestra from 1985 to 1987.

Even so, Mr. Lee never quite gave up on American orchestras, and he started making guest appearances again. “The inescapable conclusion is that he should be there more often,” wrote critic Theodore Strongin of The Times in 1966. name of an integrated orchestra like his late Cosmopolitan. After an association with the Philadelphia Opera Ebony, he took a final bow with the Louisville Orchestra in 2005.

“There has been no major change in my field,” he told The Afro-American Newspaper in 1972. “Orchestral companies feel as if they had a conductor black last year, they don’t need it this year.”

Mr. Lee’s marriage to Sylvia Olden Lee ended in divorce. He married Christin Andersson in 1979. She and Eve Lee, his daughter from his first marriage, survive him, as does a son from his second, Erik Lee; two granddaughters; and a great-granddaughter.

Despite the obstacles Mr. Lee faced, he said in an interview published in 1997 that he was not “bitter”.

“I decided then that if I couldn’t join you, I would drive you,” he said. “I kept that promise to myself.

“These two orchestras that even refused me an audition, I conducted them. I just had to. I just had to show them that I was there.