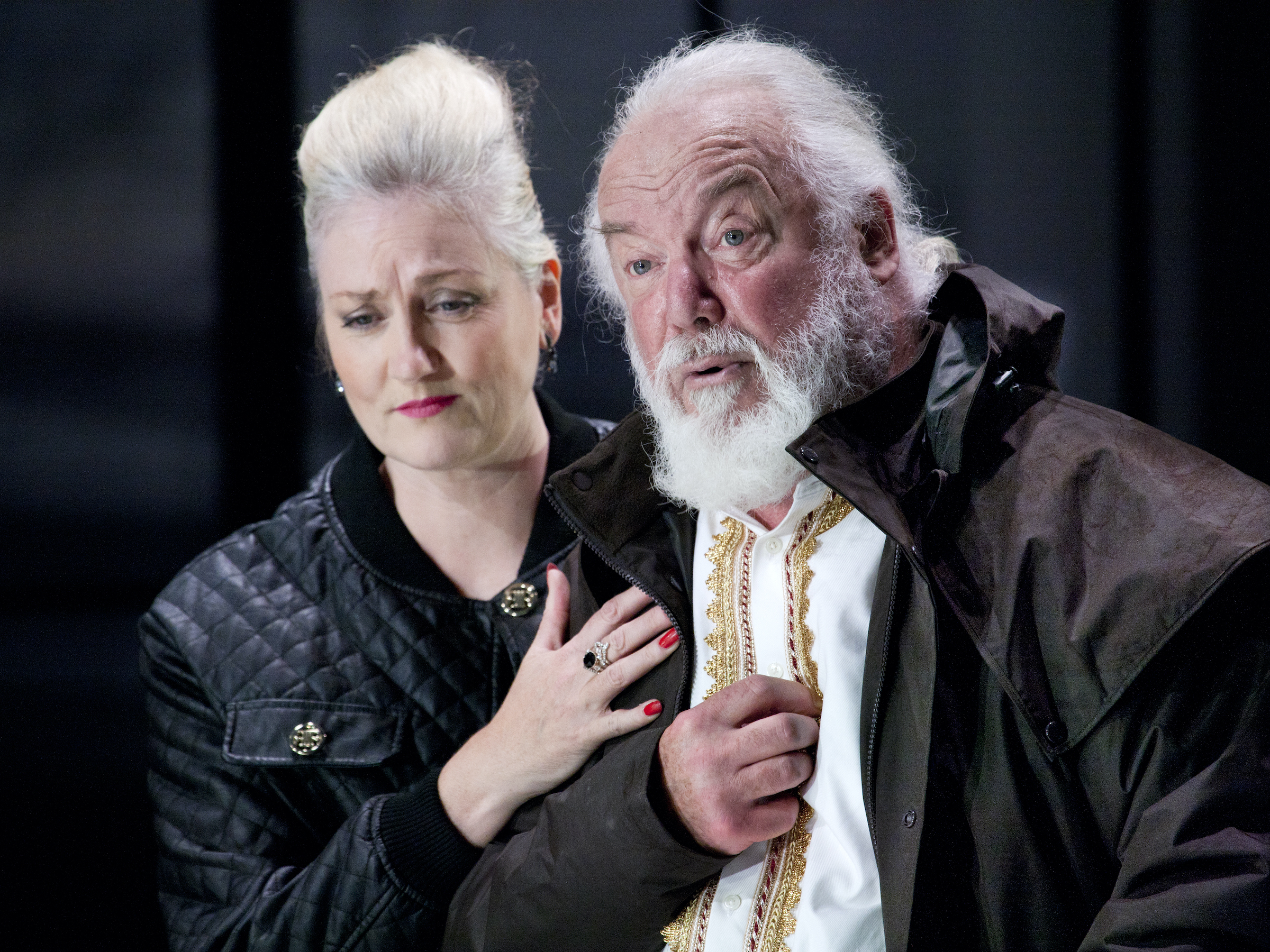 Opera singers are often judged by their vocal abilities, but on stage, there’s more to it. They must inhabit their roles and give meaning to the characters they play. The best must also be great actors, and it is with this in mind that the Grange Festival produced a King Lear starring great opera performers, such as Sir John Tomlinson in Lear and Sir Thomas Allen in Gloucester.

It was all talked about and started with Kim Begley as the madman hitting a drum and John Tomlinson as Lear entering on a large tricycle. This entertainment began what turned out to be the tremendous clarity of vision in Keith Warner’s production of Shakespeare’s play. The performances were outstanding, including Emma Bell, a star of several Wagnerian roles, who was beautifully mean as King Regan’s second daughter, excited to see one of her stilettos gouged out faithful Gloucester’s eyes. Susan Bullock was just as mean as the eldest daughter Goneril, with Louise Alder as the charming Cordelia. When it comes to meanness, actor-singer Oskar McCarthy as Gloucester’s bastard son Edmund was extremely cunning and deceptive, a complete contrast to Anthony Flaum as half-brother Edgar, true heir to Gloucester County. . A likeable figure as the chatty idiot Poor Tom, he later showed true nobility as a rightful son, and their fight with swords and a dagger was brilliantly executed thanks to fight director Bret Yount.

Edgar’s descent into apparent madness had a real counterpart, long before Shakespeare’s time, with the Islamic mathematician Ibn Al-Haytham in Basra. He came up with a plan to control the flow of the Nile, but when the Egyptian Caliph Al-Hakim invited him to Cairo to lead a team of engineers who sailed up the river, he realized his ideas were unworkable. On his return to Cairo, the cruelly unpredictable caliph appointed him to an administrative post, but he went mad and was confined to his home. When the caliph died in 1021, Al-Haytham suddenly came to his senses, openly writing scientific texts and teaching.

Presenting Shakespeare’s King Lear with opera singers in this simple staging has been a project in development for several years, and it was a revelation. Kim Begley’s madman, with his upside down brolly and a brilliant ventriloquist vignette, showed ethereal wisdom, Thomas Allen’s Gloucester sympathetic honesty, and John Tomlinson’s Lear revealed a king already losing his sanity, but conscious. of his own madness. Tomlinson is a world master of unfathomable wisdom, as evidenced by opera roles as important as The Minotaur and Gurnemanz in Parsifal, and this production delves deep into what lies beneath the surface of power.


A message from the article

We are the only publication that is committed to covering all angles. We have an important contribution to make, which is needed more than ever, and we need your help to continue publishing throughout the pandemic. So please donate.