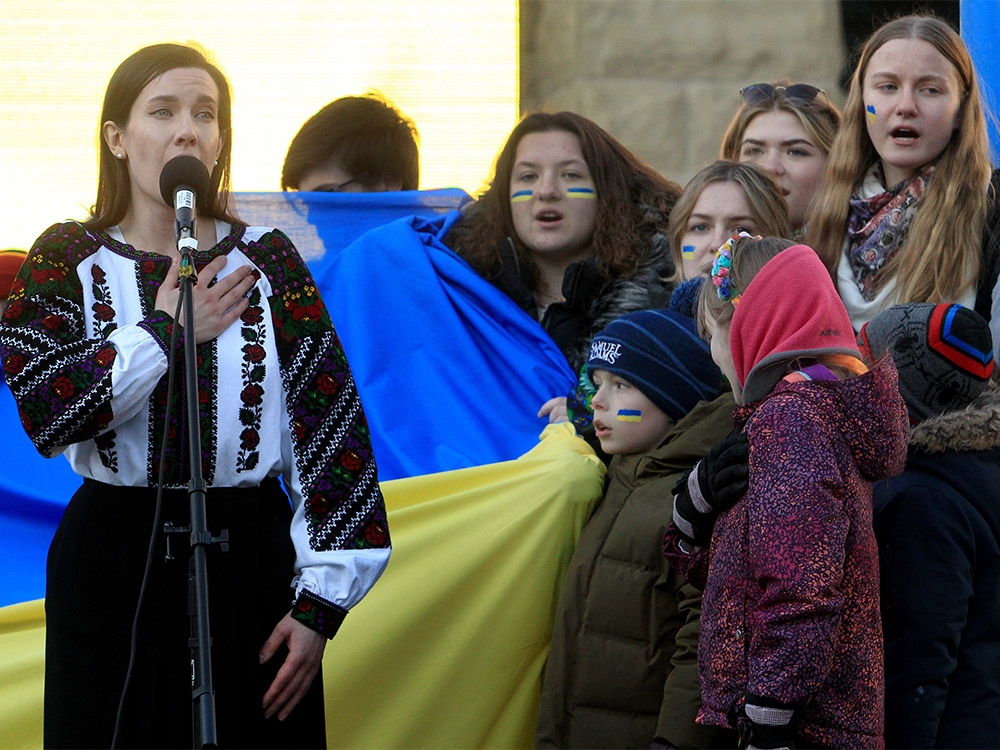 A Ukrainian-Calgarian opera singer will perform the Ukrainian national anthem ahead of the Battle of Alberta on Monday night in a show of support for the beleaguered country’s battle against invading Russian forces.

Stephania Romaniuk will sing her home country anthem ahead of the Calgary Flames vs. Edmonton Oilers game at the Scotiabank Saddledome as part of the Ukrainian Canadian Congress’ Alberta Stands with Ukraine week. The performance follows a pre-game ceremony for Ukraine before the Flames face the Montreal Canadiens on Thursday.

Romaniuk, who has relatives in war-torn Ukraine – including a close friend who is currently fighting Russian forces in Kiev – said the opportunity to introduce the national anthem and language of his homeland to such a wide audience means a lot to her.

“It demonstrates the cultural freedoms we have as Canadians, ones we shouldn’t take for granted,” she said.

“Not so long ago in Ukrainian history, under Soviet occupation, publicly singing in Ukrainian was not possible.”

Both Alberta NHL teams are celebrating the province’s Ukrainian culture and opposing Russian aggression through in-game demonstrations this week. Proceeds from the 50/50 draw from Monday’s game in Calgary will be donated to selected charities supporting humanitarian efforts in Ukraine.

So will raffle proceeds from Edmonton’s Wednesday game against the Washington Capitals, where a Ukrainian folk ensemble will perform during the game. The Axios Men’s Ensemble performed the Ukrainian anthem ahead of Saturday’s Oilers game against the Canadiens in Edmonton.

The Ukrainian diaspora is one of the largest in Alberta, with a population of approximately 350,000 people. Over 1.4 million people of Ukrainian descent live in Canada.

“(Russian President Vladimir) Putin is trying to destroy the Ukrainian nation, its culture, its language and physically its people right now,” Romaniuk said.

“To be able to challenge that effort – even if it’s in the West and we’re protected here – symbolically, I think is exceptionally important.”

The Flames will face the Oilers at the Saddledome at 7:30 p.m. Monday.

Sign up to receive daily news from Calgary SUN, a division of Postmedia Network Inc.

Thank you for your registration!

A welcome email is on the way. If you don’t see it, please check your spam folder.

The next issue of Calgary Sun Headline News will soon be in your inbox.

We encountered a problem during your registration. Try Again